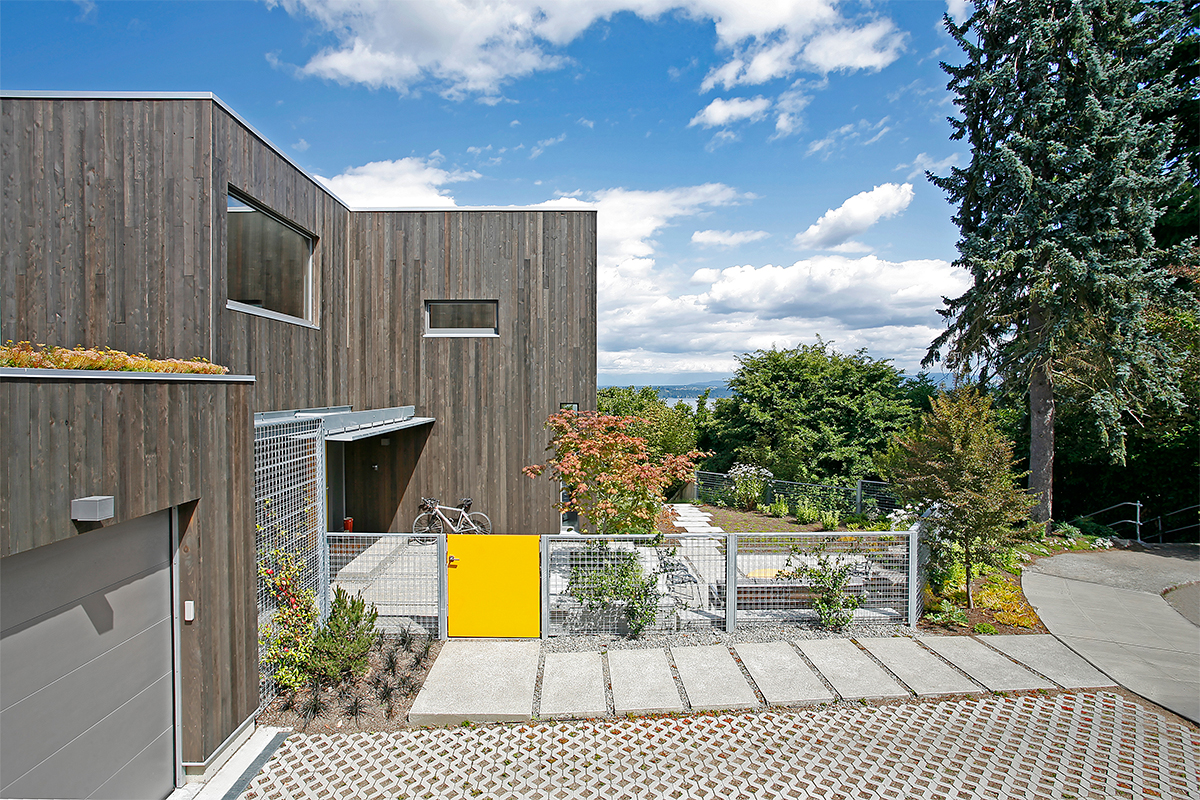 The design process was a standard one but with an emphasis on design solutions that were optimized for energy modeling. SHED and Hammer & Hand used the energy model data supplied by Dan Whitmore to refine glazing area and location, the wall assembly, as well as the mechanical systems.

The team included the owner, SHED Architecture, and Design, Hammer & Hand, Dan Whitmore of Indicator Consulting (Dan was the H&H for the project). Artisan Electric was the PV installer. The management/team structure was a typical owner, architect-builder relationship and during the design phase, there was intensive collaboration between SHED and Hammer & Hand related to the energy modeling, detailing and constructability.

“We chose to build to the Passive House standard because it seemed the most thorough and thoughtful standard given our primary goal of reducing the house’s operational energy use (as opposed to lower priority considerations like reducing the energy of construction or the embodied energy in the materials). We wanted a house that was as energy efficient as possible, and that cost at most 30% more than a “traditional” less-efficient house of otherwise comparable quality and functionality. Our hope was (and is) to help push learning, cost-lowering, and adoption of Passive House construction within Seattle, so that eventually it will be no more expensive than a “traditional” design, from a life-cycle point of view.”

The Madrona Passive House is an electric house with a 9.8kW PV net metered to the grid. The PV system was installed by Artisan Electric using SunPower panels. The house also employed one of the first Sanden CO2 Heat pumps to supply both DHW and small radiant heat loop in the concrete slab floor. The home also maintains a constant supply of fresh air with a continuously operating Zehnder HRV. The combination of a high performance and airtight envelope, an optimized low capacity heat pump, an efficient Zehnder HRV and a 9.8kW PV system has created a home that is Net Positive even when EV charging loads are included.

One issue was window size. The Zola Windows are capable of very large operable sizing and the design team took advantage throughout the house. However, just because large windows are possible and will work with the hardware does not mean that occupants will like to use them. The owners found that the large tilt-turn windows were often scary to use in the tilt position as the windows fell into the space. The weight and speed of the operation made them scary to use. This is a big lesson learned for the design team as the fix was to install limiters on some windows that reduced their functionality. This is obviously not the optimal end result for high performance European windows.

“While we would prefer to see society subsidize larger-scale solar than residential solar, because Washington state supports the latter more than the former, we decided to install solar panels, opting for non-Washington state panels and inverters, so that the performance would be as high as possible while the public subsidy would be as low as possible. Despite our bias against too-high public support of residential solar, it is of some solar advocacy value to be able to say, “This house generates more energy than it consumes” which, indeed, it does, even including the 8,000 miles per year we put on our Leaf EV! This wouldn’t have been possible without the energy efficiency of the passive house design. We try not to be “holier than thou” about our house but there is something undeniably cool and satisfying about being “net energy negative” and we’ve found that it motivates us to reduce our consumption even further than we might otherwise.”

BUILDING COMMISSIONING, START UP, AND OPTIMIZATION

Commissioning was done by Dan Whitmore and Skylar Swinford for basic mechanical systems. the Zehnder HRV and plug load monitoring while Washington State University commissioned the Sanden CO2 system. The Zehnder system proved straightforward to extraction duct runs. The plug load monitoring system revealed that the induction cooktop pulled a constant 60W ghost load. The team was able to resolve this issue by installing a relay to turn the cooktop off when not in use. The Sanden proved trickier to commission as the low capacity system was tasked with both DHW and radiant heat. It took several months to properly adjust the system to deliver water at the right temperatures for different systems. Another factor in Sanden commissioning was that a Passive house is extremely sensitive to temperature inputs and it took time to find the right temperature setting optimized for daily heat gains and losses through the envelope. Because the Hella blinds are controlled with manual/owner operated controls rather than sun sensors the daily operating of the blinds is critical in maintaining the indoor environment. By all accounts, the owners have enjoyed the learning curve in actively operating their house to keep it optimized and running efficiently.

The Seattle Land Use code restricted the development of ECA steep slope lot to the area within existing development, the footprint of the existing house. The resulting L-shaped is not an optimal Passive House plan. The project team had to conform to the land use restrictions and addressed them through the design and placement of window openings and opaque walls to achieve a balanced envelope. An additional construction issue specific to Passive House certification was the pile foundation required to support the building. The piles represented a significant thermal bridge that had to be eliminated. Typically, one would separate the foundation from the earth with a layer of foam but in their case, they chose to insulate on top of the slab and integrated the insulation with the walls to eliminate the thermal bridge.

They had an excellent team comprised of a committed owner, an experienced general contractor, and design. The most important lesson was not learned so much as confirmed: teamwork and commitment to building well are essential to achieving both Passive House and Net Zero buildings. The detailing is complex and technical and the risks of high performance.