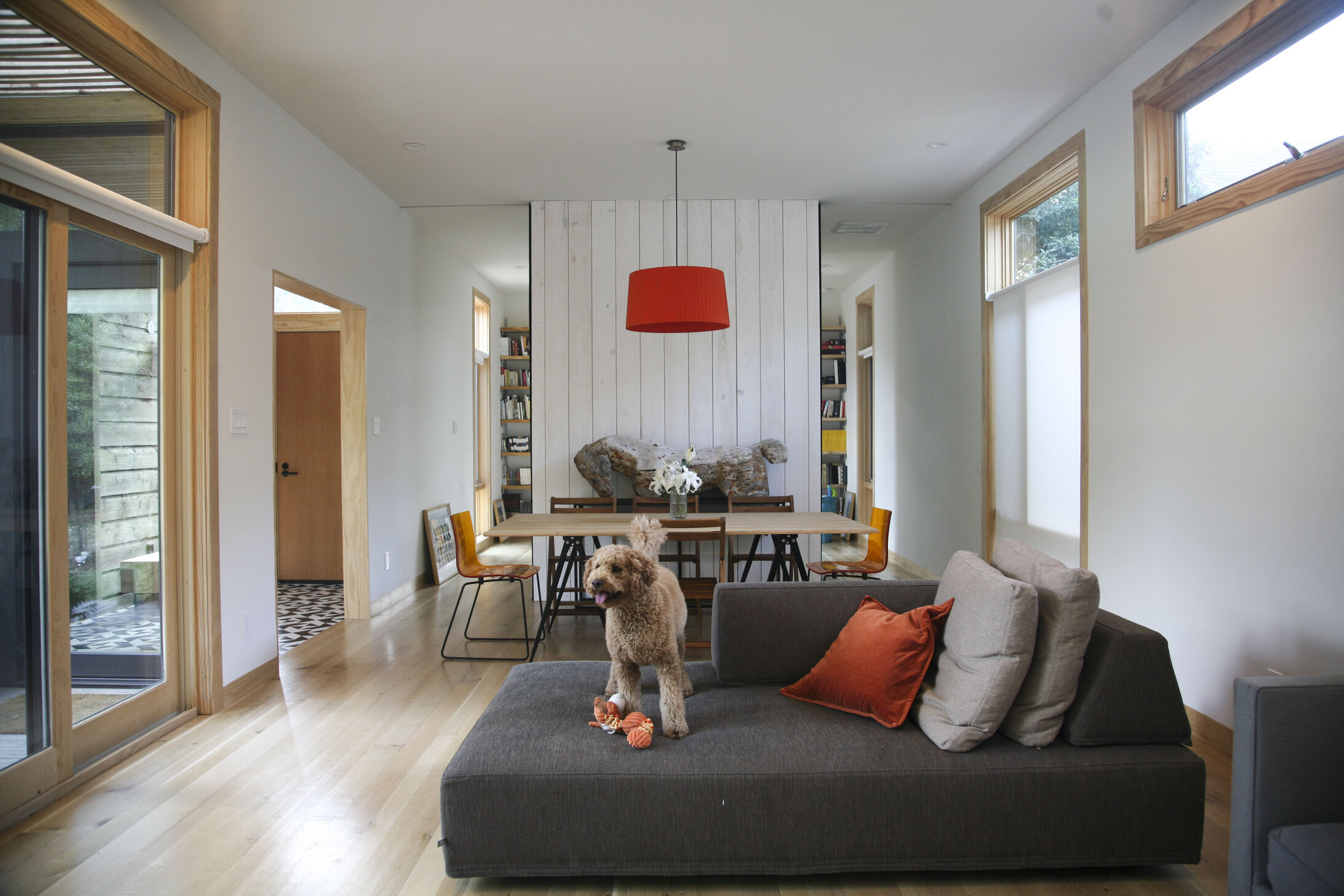 The existing, pre-developed site consisted of two empty urban residential lots. Historic homes were built on the sites circa 1910 but both burned down in a fire circa 1990. The existing lots consisted of non-native Bermuda Grass and King Ranch Bluestem Grass. The site drained naturally to the street at a 3% grade and was surrounded on all edges by native Common Hackberry Trees, Anacuas and Non-native Ligustrum and Chinaberry trees. The site preparation consisted of removing of all the invasive Ligustrums, Chinaberrys, and non-native Crepe Myrtle trees.

During construction, the entire site was regraded and terraced to allow for flat planting zones to retain more moisture during large rain events and raised beds for planting and food cultivation. All grass areas were solarized through the summer to remove Bermuda and K.R. Bluestem grasses. Native groundcovers were planted in raised beds as a “bumper-crop” prior to preparation of cultivated areas.

The general planting zones mimic the 3 major eco-regions seen in and around San Antonio:

The intent of the landscape is to provide for maximum habitat and forage potential for local insects and avian species.

A total of 26 new trees were planted on site. All trees are native and provide either nectar, fruit production or are designated as larval hosts for local butterfly, moth, or beetle species. The intent of the planting was to create maximum diversity through pollinator gardens and nectar-producing flowers for insects and hummingbirds. The central courtyard is designed as a pollinator and bird attractor, with water sources for birds and bees.

All hardscape consists of pervious material: Decomposed Granite Pathways, Pea Gravel Driveway and brick paving for the brick courtyard. Concrete was used for the sidewalks and driveway apron to meet City Standards and Code requirements. A small portion of gutters and downspouts are channeled and routed to deliver water to the pollinator garden in the courtyard or to specific trees and plants surrounding the home depending on water needs.

All landscaping and planting, including all trees were planted by the homeowner/architect over a period of 4 years, including 6 primary trees that were planted prior to construction to allow for maturity while the building plans were being finalized. These include the Honey Mesquite, Texas Red Oak, Black Jack Oak, and Three Escarpment Live Oaks. The three Bald Cypress trees were pulled from the San Antonio River banks as saplings and were nurtured in pots for 3 years prior to planting in the ground.

As the trees mature on site, the available sunlight will decrease allowing for more growth of understory trees and greater moisture retention in the soil. This process will mimic plant succession processes seen in nearby hill country forests, converting the Blackland Prairie to the denser riparian ecosystem. The site was previously part of the larger drainage network of the San Antonio watershed. The soils tested on-site consist of a minimum depth of 30’ of clay from river deposits over time. Due to urban infrastructure, this riparian ecosystem no longer exists (drainage has been channelized and buried for interstate highway construction). This new development has been an effort to restore the native ecosystems previously seen on the site pre-European arrival.

The site currently provides roughly 2,600 SF of planted area dedicated to urban agriculture. South Texas is a warm and humid climate, offering an incredible ability to grow plants for food production. However, due to the extremely hot and dry summers, maintaining non-native species for food production requires a large amount of water as these plants are typically non-drought tolerant. A number of native fruit or nut-bearing trees are grown on site: Pecan, Red Mulberry, Texas Mulberry, & Mustang Grapes. They also use raised beds for non-native vegetables. They also have a number of fruit-producing trees (citrus grove) that need to be supplemented with irrigation.

The Mesquite House is a single-family residence. A mobility plan has been provided. It is located in downtown San Antonio. The current owners work within a 15 minute walk of their downtown offices and drive infrequently. The existing neighborhood is historic and was built pre-car, allowing for easy walk-ability. Grocery stores and restaurants are all within walking distance. A gravel driveway was built for off-street parking (per city requirements) but is not used.

Public transportation (bus lines and city subsidized bike share) stops are within easy walking distance. Bike storage is built-in on the front porch of the house, along with bike maintenance tools.

This Single-Family Residence uses a PV array on the roof for well over 105% of its energy consumption requirements. There is no combustion on site.

The PV system is 11.16 kW, 36 panel system. 30 panels face directly South, while the remaining panels face east due to Historical District Requirement to minimize solar panel visibility from the public-right-of- way on the West elevation of the home. PV panels are still visible from the street as the owner asked for historical approval due to educational component of the system for the public.

The house is monitored using an eMonitor (SiteSage) for sub-metering and circuit tracking. During the testing period, there were a number of issues that came up that were only brought to the owner’s attention because of the eMonitor. Two examples: During the first full winter, the airhandler circuit load was spiking dramatically, when typically the highest demand would align with the cooling demand season. After troubleshooting and working with the HVAC installer, it was discovered that the default settings for the air-handler had “auxiliary heating” set to turn on at 45 degrees F outside air temperature. “Auxiliary Heating” is electric resistance coils inside the airhandler that can pre-heat outside air before delivery to the system. These numbers drastically increased the household’s monthly use. A second example of the monitoring system’s usefulness was when their Heat Pump Water Heater compressor broke. This happened without the occupants knowing about it and the system automatically reverted to full electric mode. Similar to the airhandler, the occupants were made aware of the problem after their water heater circuit load tripled for the month.

High-Efficiency appliances were used at every opportunity:

The PV panels were installed by South Texas Solar and the system is net-metered through CPS Energy’s net metering system (City of San Antonio public utility). The PV array was subsidized through local and federal subsidies and is financed through GreenSky.

The system has been operational since mid-January of 2017 and has been net-positive (annually). Recently, the team has completed the guest house, resulting in about 50% net-positive results on a month-to-month basis. The occupants continue to monitor the home and are testing other appliances through the guest house construction (on-demand water heater vs. their heat pump water heater in the Mesquite House).

The Mesquite House is located in downtown San Antonio, in a designated historic district which was once the working-class neighborhood for the railroad workers walking to an from work at the nearby Southern Pacific Railyard and the original downtown Railway Station. The homes of the district are humble and well-built, lasting well over 100 years in most cases. On the immediate block, the new house is surrounded by, single-family homes and the original two-story grocery store (now converted to an artist studio) nearby. All the homes in the area were constructed of wood framing with old-growth long leaf pine set on joists over 6’ cedar posts, due to clay soils of the area. All of the homes are clad in painted long leaf pine. Many of the existing roof structures are the original tin, rusted and weathered for over a century.

From the outset, the designers and owners knew that the sensitivity to the forms and scale of the new construction was going to be highly scrutinized by the Historical Design Review Commission as part of its permitting process. It was critical that the new buildings integrated themselves into the neighborhood fabric. Instead of trying to create a new architectural language, the team wanted the design to feel it belonged in the district, while still having some modern sensibilities while also showcasing the net-zero ambitions of the project (PV panels in historic districts are typically now allowed).

A common design seen in the neighborhood is two perpendicular volumes with simple gable roofs. The intersection of these two forms sheltering an entry and porch, visible from the street. The Mesquite house took this concept and pulled apart the roof forms to create two individual blocks, while still allowing for the entry to be framed by these volumes. By doing this, a separate material quality was then applied to both structures: The first being Eastern Red Cedar, a locally sourced wood (Bastrop, TX) siding that is a cousin to the more common Western Red. This volume is the most visible from the street and was stained using an organic weathering agent that feels humble and at home in the district. The second volume is clad in a Corten 7/8” corrugated metal siding that is a call back the simple industrial and utilitarian structures and materials that are found in the Southern Pacific Railyard located two blocks north of the site.

These two building blocks were then set into the landscape to allow for lush native vegetation to grow within the interior courtyard that they frame. The courtyard is the heart of the public spaces, essentially replacing the living room and providing the anchor that ties the separate living spaces together and drawing people to the outdoors. It is shaded by Escarpment Live Oak trees that were planted 2 years before the construction began to allow for their establishment prior to occupation of the site. These, along with the other major trees, were planted earlier than the build, despite the difficulties they created for staging and access they were critical in providing the shade and natural qualities needed for the home’s integration into the outdoors. These outdoor spaces are also planted with pollinator gardens so that from the interior spaces, plant and animal life is constantly in view and part of the experience of “being home”.

All of the habitable spaces in the home have access to natural daylight (including the walk-in closet and restrooms). The main living volume is 14’ wide by 100’ long, allowing for natural daylight on the north and south of living areas as well as to allow for optimal solar access (for daylighting and the PV arrays). The design intended to allow for views out of the different living spaces at key moments to allow the small footprint to seem larger than it is in reality. This also provided each space with an intimate connection to the outdoor garden, courtyard or front yard.