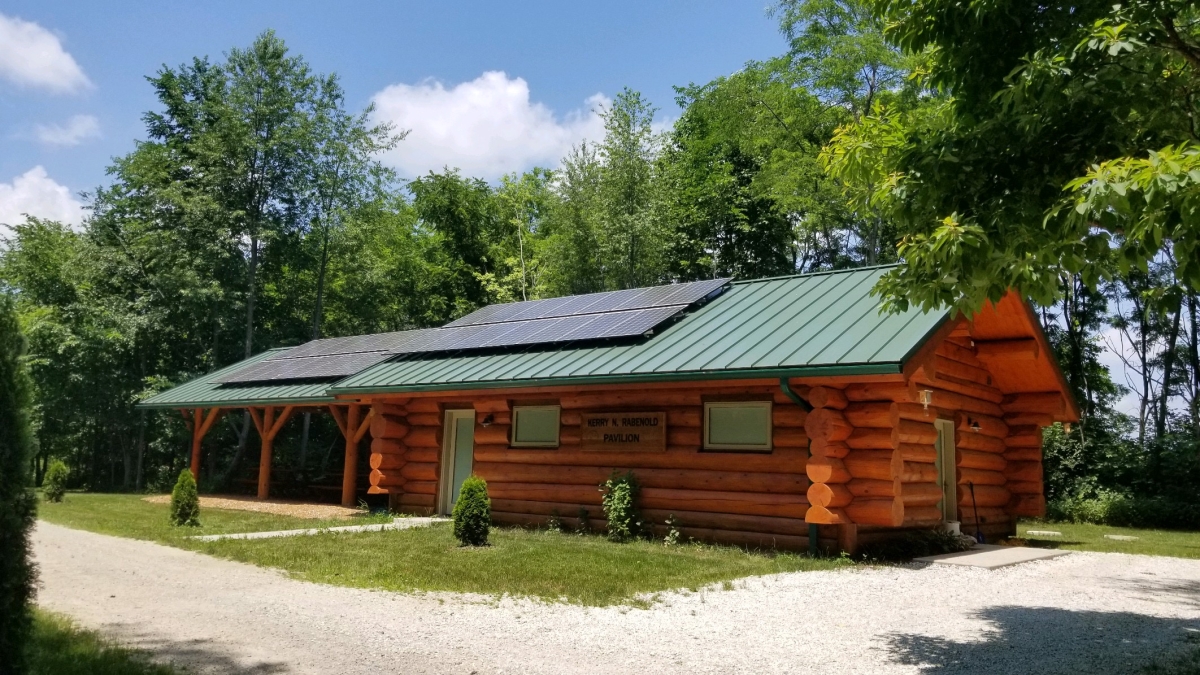 A primary objective for the project was creating a building that would be a model of energy efficiency and environmental sustainability, in addition to providing caretaker housing and an open pavilion for students and visitors. The idea was also to show to the donors, researchers and students how an energy efficient sustainable building works. The building was named after Dr. Kerry Rabenold, from the Department of Biological Sciences, responsible for leading the project.

This project has been ten years in the making. Initially, an architect from Pittsburgh developed a very bold project in terms of aesthetics, but it had some flaws and misconceptions. For example, the east-west orientation of the solar panels to be installed on the building’s roof was not ideal; a green roof with a rainwater collection system including a storage tank was shown to be unnecessary, since rainwater could be naturally absorbed by the soil and after being naturally treated, captured by the well for use in the building. The geothermal system originally envisaged was an air-to-air type, which is less efficient than the water-to-water system. Further, the geothermal system was based on earth tubes that are usually humid and can bring fungus and mold to the building, which we wanted to avoid. However, the idea of using a geothermal system to provide warm water to the radiant floor heating system proved to be very viable and was maintained in the final version of the project.

A second, local, architect developed a simpler design, closer to what was built, but still with a were very high project cost, which had to be significantly reduced and simplified. In the end, the final version of the project was not designed by an architect but was mainly the product of the project leader (Dr. Rabenold) and the contractors working together. They further simplified the second architect’s design and basically created a very traditional log cabin, with sophisticated energy production, heating, and air conditioning systems.

The final design of the log cabin has few doors and windows, both to guarantee a better thermal performance for the building, and to ensure privacy to the caretaker residents, since the hut is located in a public area, frequently visited by students and researchers. The PV panels installed in a super-efficient roof system are facing south and the geothermal system provides warm water to the radiant floor heating system

A total of 28 PV panels were installed on the roof, all facing south, ensuring maximum exposure to the sun throughout the day. The solar system provides sufficient energy for all the regular residential uses including lighting, plug loads (efficient appliances), ceiling fans, and water heating, as well as the pumps of the geothermal system and the water supply well. In addition, when energy production exceeds the log cabin’s demand, the excess energy powers an adjacent classroom and laboratory, as well as other facilities in the complex, such as a birdhouse and a shed.

The geothermal system helps save energy by providing warm water (55°F) for the cabin’s radiant floor heating system during the winter, and cooled water (55°F) for the air conditioning system during the warmer months. In addition, the geothermal system is equipped with a desuperheater, which recycles waste heat from the heat pump’s compressor and uses it to heat water.

Although the building was not designed and detailed by a team of designers, the project benefitted from an engaged and willing construction team. The builders and suppliers were extremely competent and supportive throughout design and construction, always helping with important details. The team at Solar Systems of Indiana calculated many scenarios and managed to arrive at a project with an excellent cost-benefit ratio. The team that built the roof was also excellent, installing a very efficient and long-lasting roof, with a sophisticated system for fastening the solar array in the seam of the metal roofing panels.

Another important achievement is demonstration that an energy efficient building can be comfortable. Comfort is particularly important in the case of this cabin, as generating interest in the role of reserve caretaker carries enough other challenges!