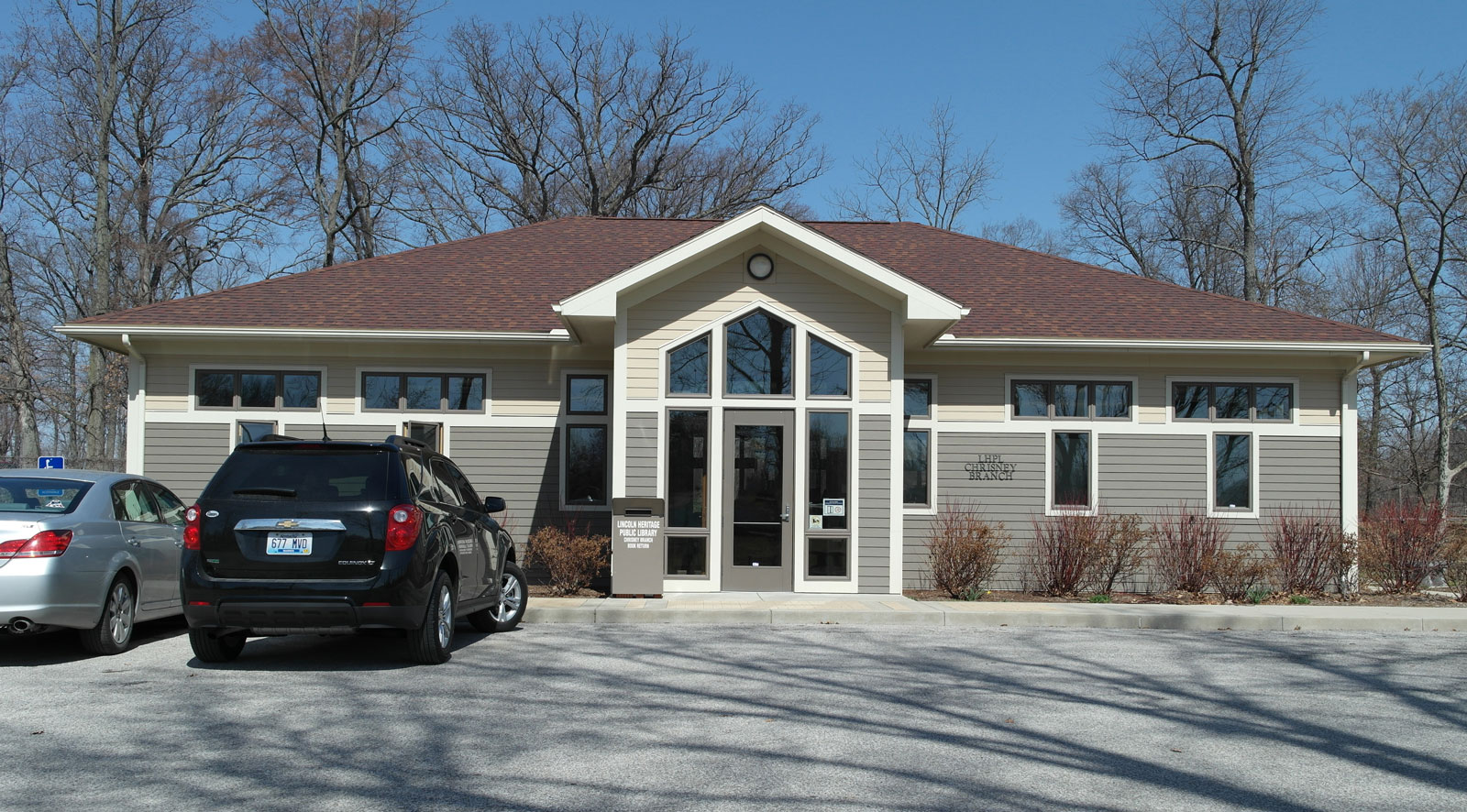 In 2007, the Town of Chrisney, a small, rural community of fewer than 600 people, executed a feasibility study for a prospective library facility. The study revealed that a branch of the Lincoln Heritage Public Library could only be realized if it had virtually no operating costs due to the limited capacity of the local library district for new operating expenditures. That paramount constraint was countered by the enthusiasm of the citizens, who filled the local gym for several planning meetings. This constraint also led to the consensus that this branch library would have to be a net-zero-energy facility, otherwise it could not be built. Thus, a vision for the project had been born. In 2007, the Town of Chrisney obtained a grant from the Indiana Office of Community and Rural Affairs to construct a branch of the Lincoln Heritage Public Library system. North Spencer County School Corporation donated an acre of land adjacent to the elementary school outdoor nature lab. With the addition of local fundraising, the community secured funds to erect a 2,400-square-foot library for approximately $416,000.

To the local community, the Chrisney Branch needed to serve as an education tool. The building itself served as a tactile demonstration of how high-performance green building and renewable energy could be realized on a tight budget in a community with limited resources. In addition, the facility needed to elevate the human condition. It needed to be beautiful, accessible and inspirational. The Town of Chrisney engaged Indianapolis-based Browning Day Mullins Dierdorf and Biagi, Chance, Cummins, London, Titzer, Inc., from Evansville, Indiana, to design a net-zero energy building response within the project’s tight budgetary constraints.

The project opened to the public in April 2009. Among a multitude of integrated design systems, certain design features and analyses proved instrumental in achieving the project’s ambitious energy goals. In addition to net-zero energy performance (the building actually produced 1,861 more kilowatt-hours than it consumed in its first year), the project proved to be very cost-effective. The building, its mechanical system with geothermal heat pump, its electrical system, the photovoltaics and all other associated systemic components were constructed and installed for approximately $155 per square foot, which was significantly below the projected project cost.

The project is located on a previously developed, underutilized, lightly-wooded site owned by the Town of Chrisney and used occasionally by the adjacent elementary school. The team worked to minimize site impacts.The site preserved as many existing trees as possible. Nine trees were necessarily removed, while ten trees were successfully preserved. Six new trees were planted as part of the site improvement package.

The site included an indigenous flora palette. Plant materials included a drought-tolerant mix of deciduous trees, foundation shrubs, grasses and ferns. Though it appears on the site plan, the alternative for bio swales was not within the project budget. Therefore, the wooded swale mix was not installed. The project does not feature permanent site irrigation.

Hardscape was minimized. The 13-vehicle parking lot is compact and represents the minimum lot size determined necessary to adequately service the library staff and patrons. It was the desire of the project team to nestle parking spaces within the shade of nearby existing oak canopies. However, the solar panels needed adequate solar access.

Going beyond design rules-of-thumb and approximations based on perceived site obstructions from foliage, the design team used devices in the field to determine exactly what portions of the sky would be obstructed by trees and any other nearby objects. A detailed solar access study revealed that certain locations would allow more direct sun to reach the solar panels than others. The design team sought to maximize solar access while minimizing tree removal. This led to a strategy to put the solar panels on a freestanding wood structure in the sun while siting the building in the shade of 100-year-old oak trees.

The project fell under the purview of two Authorities: the Town of Chrisney and the State of Indiana. The project needed to be reviewed by the Town of Chrisney to ensure that it adhered to the Advisory Plan Commission’s Town of Chrisney 1999 Compressive Plan. During the review process, the Town Council found the library and its use of on-site solar energy favorable and thus there were no regulatory hurdles with the municipality.

The mandatory plan review with the State of Indiana proceeded quite typically. The project type, scale, location and innovations did not prompt any regulatory hurdles.

The library and the community raised over $88,000 for a matching fund in six weeks. To further exemplify the favor this project had with the state government, consider the following. The unusual, yet innovative, nature of the project helped the project rise to the top of the Indiana Office of Community and Rural Affairs (IOCRA) grant pile. Eventually, the Indiana Office of Energy Development provided an additional $24,000 through an Alternative Power and Energy Grant.

Providing opportunities for public input garnered a sense of ownership with the local citizens. This facilitated grassroots fundraising and community support, both of which were vital in the realization of this project.

The Chrisney Branch was conceived as a net-zero energy library. As such, an integrative process and design performance modeling were leveraged during the earliest stages of the design process.

Modeling of the solar resources on site was performed to determine the most efficient position of the photovoltaic panels considering year-round operation.  The library building was positioned to take advantage of the significant trees on site for shading during summer months and to experience maximum passive heating of the building during winter months. Energy efficient and energy conserving features were built into the construction for sustainable energy performance.

The ground-source heat pump (GSHP) concept of drawing energy from the earth is practical, clean and safe while costing less to operate than currently popular and efficient hybrid high efficiency gas furnace system. Expected savings over an all-electric system (fan coil with electric heat and central air conditioning) are 60% in heating mode and 40% in cooling mode. The installed GSHP circulates water in a closed loop through pipe installed in two (2) 300-feet-deep wells utilizing the warmer earth temperature during the winter and transferring heat to the cooler earth temperature in the summer.

Photovoltaic (PV) panels are located on a nearby Learning Power Pavilion. The pavilion location and the directional and angular position of the panels are such to maximize the solar energy capture. The bifacial solar panel generates electricity on the front and back sides.

The project included inverters that receive solar energy from the photovoltaic panels which allow the captured solar energy to serve the building electric demands.  Excess electrical energy is fed into the public electric provider’s (Vectren) grid system. Since its opening in April 2009, the project has produced an annual excess of energy, resulting in a credit on the library’s monthly energy bill.

The above example illustrates the cost-effective product of fully integrated team effort to produce and operate a facility with net-zero energy consumption. The Lincoln Heritage Public Library, Chrisney Branch, is not only a sustainable facility, but one that offers an excellent educational setting for a greater environment tomorrow. The Library, Learning Power Pavilion and the adjoining elementary school with its outside learning lab, provide an innovative teaching classroom for all generations.

The library addressed the concept of “beauty and inspiration” in number of ways. First, the traditional form, scale and materiality of the structure fits within its surrounding low-density context and demonstrates to the local community that high-performance design – net-positive energy, in fact – does not require a radical shift in a community’s preferred design aesthetic. Contrary to any preconceived notions, a drastic departure from the desired traditional pitched roofs, lap-siding and a simple, rectangular floor plan is not necessary in order to achieve beauty and delight.

Recognizing the physiological and learning benefits of introducing full-spectrum natural light and fresh natural air, the design team carefully balanced the library’s glazing size, location and specification. The design team utilized LBNL’s Radiance and Autodesk Ecotect Analysis to analyze the project’s solar access and interior illumination during various conditions. The result was a 19.5% glazing percentage with operable windows to allow natural ventilation during mild seasons. The daylighting and natural ventilation also hold educational value, especially with regard to their influence on energy performance outcomes for the project.

With consideration to providing visitors and students with a stronger connection to the natural environment, the project is nestled within a lightly wooded site and provides a number of indoor and outdoor learning spaces.

Regarding the educational qualities of the facility, the Chrisney Branch library serves as an accessible, constant, active demonstration for the local community. Many of the energy-related systems are on display or acknowledged via signage for educational purposes.

In concert with the natural lighting and ventilation by using a ground source heat pump, the energy for heating, cooling and lighting of the building is drawn from the earth and sky. This provides students and community members alike with a hands-on lesson about tapping into natural energy flows.

The marquee energy-related educational feature of the Chrisney Branch library is the on-site renewable energy generation system. Rather than mounting the bifacial photovoltaic (PV) array atop the library’s roof structure, the design team opted for a freestanding structure. The wood-framed Learning Power Pavilion was the result of important considerations. Design teams often locate net-zero energy buildings in the sun because the facilities feature integrated solar panels on the building. By constructing a separate Learning Power Pavilion in the sun and keeping the building in the shade, much less summer cooling is required and the community patrons and elementary school children get a demonstrative, educational, sheltered outdoor classroom for the outdoor learning lab. This decision to separate the Learning Power Pavilion structure from the library also solidified the value of the donation from the school corporation and helped attract funding. Moreover, it provides another informal community meeting space.

In order to cultivate a better environment through which both students and visitors can experience the educational aspects of the project, the library has implemented a signage program throughout the facility. In addition, a formal tour of the library’s green design features is provided every Earth Day. In addition, a number of tours are provided throughout the year as requested. The Lincoln Heritage Public Library has a website for the Chrisney Branch, through which information about the net-zero library is provided and real-time, on-site solar energy production data can be accessed through a digital dashboard.