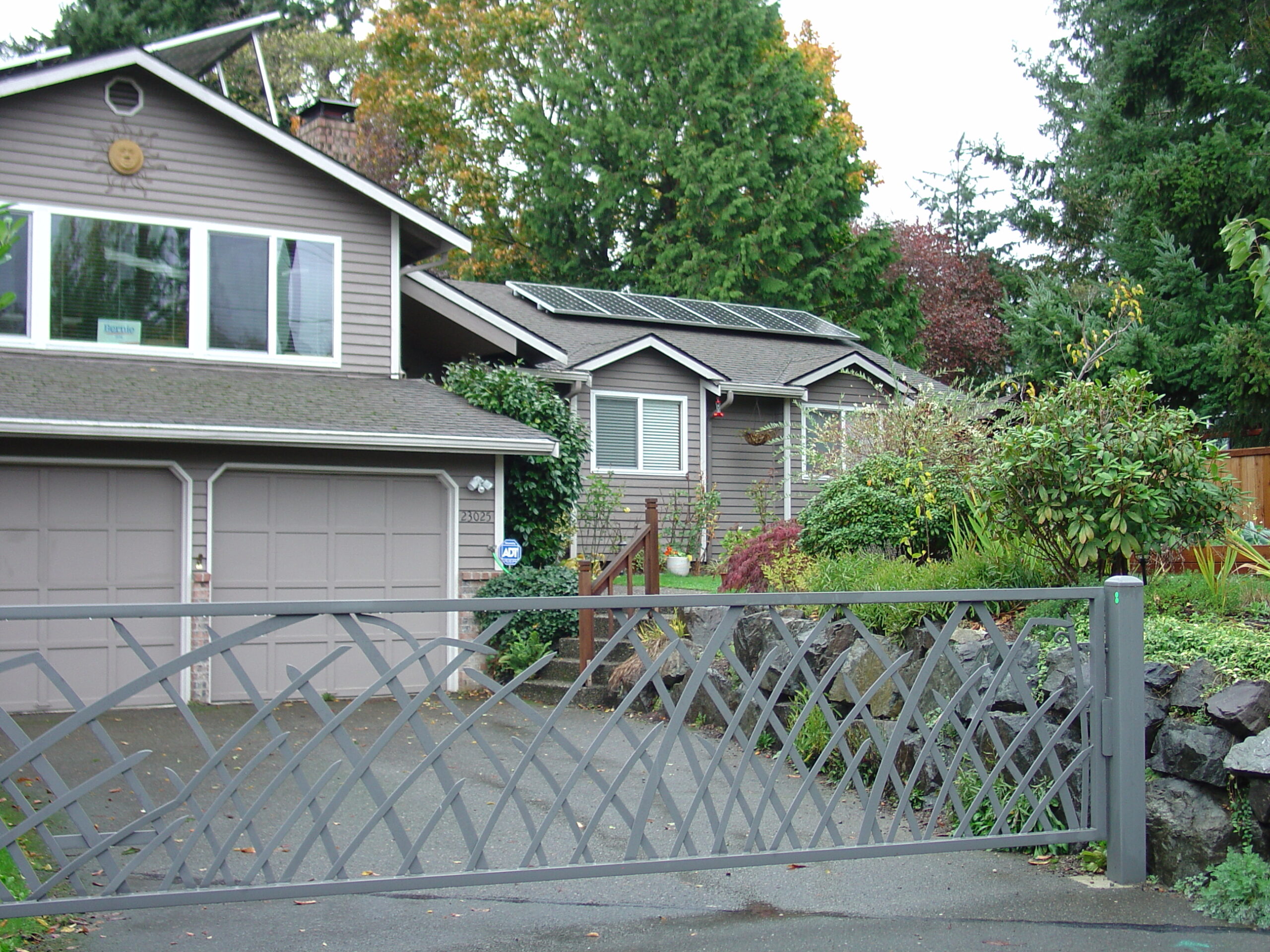 Owner David Kendall spent his career as a marine biologist, acutely aware of the impacts of climate change upon ecosystems and human life. Upon retirement, he and his wife decided to take environmental responsibility into their own hands and lower their carbon footprint as much as possible. In 2012, they downsized to a house in Edmonds, WA, which they then retrofitted with solar panels and renovated to improve energy efficiency. Improvements continued into 2015, when they installed rainwater cisterns and added two vegetable gardens. The property also features a living Emerald Green Arborvitae hedge across the front yard in lieu of a standard cedar fence.

The site is located in a greyfield area (indicative of developed but underutilized land), and the 1987 tri-level constructed home is a single family residence typical of those residences found in the Lake Ballinger neighborhood. It initially had a one-year-old gas furnace and gas water heater, and the house was built and insulated to 1987 standards. The house had a large pine tree located at the south-west corner, which was reluctantly removed to enable the solar installation (due to heavy shading by this tree on the south roof). An Emerald Green Arborvitae fence was placed across the front yard and the following trees were planted: cherry, Japanese maple, plum, dogwood, and golden bamboo. In September 2015, the owners completed a Lot Line Adjustment with the City of Edmonds and Snohomish County, which added 15’ by 70’ to the existing property area across the west boundary line (new project property area = 9,225 sq ft). Owners also added two vegetable gardens (south and east side of home).

After purchasing the new home in June 2012, owners initially installed in August 2012 a 9.84 kWh solar system (41-Itek Panels, and Bluefrog APS Microinverters). The Itek panels and Bluefrog APS Microinverters are made in Bellingham, Washington, and therefore get the maximum net-metered payback of $0.54/kWh. Owners chose Microinverters because of concerns about shading effects from trees around our home and their influence on solar production. Shading on one or more panels will drop the production of only those panels shaded, but will not drop the production on the unshaded panels, as each panel reports its production independently of the others. On the other hand, panels hooked up in series will be severely impacted by shading and production will be reduced to the lowest producing shaded panel hooked up in series. Owners still get some shading from trees on the west side of the home in late afternoon, but are willing to give up some of the solar production rather than remove the offending trees. Owners monitor solar production real-time with an APS Energy Monitoring System, which is useful to highlight shading issues relative to panel performance throughout the day for all 55 panels. However, the primary means of tacking solar production is obtained by taking a meter reading every evening at end of the solar production day from the Public Utility District (PUD) meters located on the south end of home for total electricity demand and solar production.

The weatherization repairs, including insulation, have dramatically reduced the heat gain to the home during the summer and heat loss during winter, and owners have generally relied on opening windows for ventilation and the use of ceiling fans, which have kept home quite comfortable during the warmer summer months in lieu of cooling from the heat pump system.

Owners were able to exceed the Living Building Challenge and Petal Certification requirement of 105 % not only during the 12-month performance period in 2014 (181 %), but also during the preceding year, 112 % in 2013, and are expecting to exceed these standards for 2015 as well. Energy demand totals during the reporting period include the home’s energy demand, but also includes all Electric Vehicle (EV) charging demands. Energy demand totals do not have any combustion energy, as those energy sources (natural gas furnace and water heater) were removed shortly after home was purchased in 2012 and replaced with an electric heat pump and heat pump water heater. As a result of incremental energy efficiency improvements discussed in narrative above, owners have gradually improved energy use intensity (EUI) over time. In 2013 owners achieved an EUI of 13.55 kbtu/sq/yr ft. (2013 total home only energy demand = 8,124 kWh/yr x 3.41 (kWh to kbtu conversion) = 16,705.59 kbtu / 2044 sq ft), which subsequently improved to 9.227 kbtu/sq ft/yr in 2014, and owners are expecting a further reduction in EUI in 2015. Owners have placed an order to have an on-site 10 kWh energy storage device (Tesla Powerwall) to be installed in garage as soon as possible in 2016, to provide resiliency and backup power in the event of a power outage. Contained within the 10 kWh (backup) Powerwall’s indoor/outdoor-rated enclosure is a rechargeable lithium-ion battery, a liquid thermal management system, a battery management system and a smart DC-DC converter for controlling power flow.

Owners renovated an existing 1987 home with weatherization repairs, solar panels, electric heat pump & heat pump water heater, living Emerald Green Arborvitae fence, vegetable gardens, and cisterns. This home is located adjacent to the Interurban Trail and is frequently called out as a source of beauty and inspiration by many pedestrians and bicyclists’ passing by, who make positive comments about the home. “We believe the sustainable updates to our home have made it a thing of beauty, and inspiration to us, our neighbors, and many folks passing by on the Inter Urban Trail,” say the owners. “We get a lot of positive comments and high fives from folks passing by letting us know that they appreciate, understand, and approve of what we are doing. Both my wife and I spend a lot of time talking with anyone interested in our home, and we love to answer questions from people passing by who have questions about solar and sustainability. We have prepared a Fact Sheet summarizing the sustainable actions we have done with vendors listed. We hand this out to anyone interested in knowing more or pursuing sustainability updates to their homes. Our home was the first home in our neighborhood to install solar panels, and we now have two additional homes in our neighborhood, that have added solar panels within the past six months, as a direct result of our interactions with people in our neighborhood, and our home’s high visibility with sustainability features (solar panels, heat pump, cisterns, vegetable gardens)”.

A narrative from the owners:

My wife and I hope to serve as an example showing others interested in sustainability what an individual homeowner can do to reduce their carbon footprint. We have been deeply impressed and inspired by documented successes illustrated by the International Living Future Institute, especially completely sustainable buildings like the Bullitt Center and its sustainability features including its Net Zero Energy Building (NZEB) accomplishments (achieving 171.5 percent: solar production/energy demand as documented in April 27, 2014 Seattle Times). These examples and success stories have helped to further motivate us to keep working to further reduce our energy expenditures, and make additional sustainability improvements to our home.

Many people passing by our home on the Interurban Trail are intrigued by our relatively unique home with the solar panels prominently displayed, but some skeptics have questioned why we have solar panels, as it was their understanding that solar does not work effectively here in the Pacific Northwest. It has been our mission to change that misunderstanding by documenting our positive experience, so as to educate people about the positive attributes of solar energy and sustainable living. As a direct result of those efforts two neighbors on our street have installed solar panels, and we have influenced others during the Green Homes tour to seriously consider adding weatherization repairs, solar panels, electric heat pump and heat pump water heaters, and cisterns.

My wife and I traveled last fall with our electric car from Edmonds, WA to NYC to march with 400,000 other concerned citizens in the People’s Climate March to the U.N. It was inspiring to travel 8,009 miles (our trip ultimately took us down to St. Augustine, FL from NYC, and back to Edmonds, WA) without using one drop of gasoline, utilizing the Tesla Supercharging Grid. We have been net energy producers since we moved into our new home in September 2012, and it is a good feeling knowing that we produce all our homes energy needs, including fueling our car with electrons off our roof’s solar panels.

Moreover, in the spring of 2014, we decided to add cisterns (total: 4,590 gallons: 2-1500 gallon below ground cisterns, and 3-530 gallon above ground cisterns), and the cistern installation was completed in March 2015; we have been able to dramatically reduce our water use using the non-potable stored cistern water for both vegetable gardens and landscaping watering requirements over the very dry summer, when water shortages were pressing in the region. We had sufficient water storage in the cisterns to carry us through this period. It is our plan to eventually hook up the house to the non-potable cistern water, initially to flush the toilets, and provide water to the washing machine, and in the future, when authorized/approved by Snohomish County, we intend to install a filtration system, and utilize the potable cistern water for drinking water use. The cistern addition this year was in part inspired by the Bullitt Center example.

As a result of our sustainability actions, we have looked for opportunities to inform and educate the public about what an individual homeowner can do to improve their home and make it more sustainable. I (David Kendall) was selected as one of ten presenters in October 2013 at the Northwest Ecobuilding Guild’s 10’10’10 Conference, and my presentation was entitled: “Sustainability Dreams Do Pay Off.” We also featured our home in 2014 and 2015 on the Northwest Ecobuilding Guild’s Green Homes Tour. We very much enjoyed showing our home to people interested in sustainable living, and our experience with solar energy over the past three years. In the fall of 2014, we were interviewed by the City of Edmonds’s Mayor’s Climate Protection Committee, and this interview was featured in the My Edmonds News in November 2014.