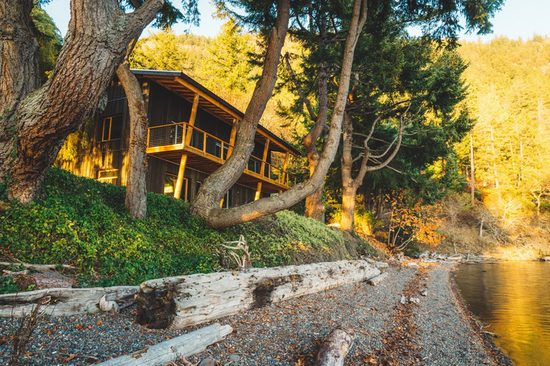 Ecologically the site is characterized by adjoining ecosystems. Historically the Garry Oak ecosystem met the shoreline-riparian area within the site boundaries. The site has been inhabited by people since time immemorial – because of this historical inhabitation, it is a significant archaeological site. Preceding first nations inhabitation of the site, it was inhabited by settlers for residential purposes.

The existing site prior to construction was manicured in a park-like manner with a fully irrigated 6 hole golf course and large amounts of non-native planting. The site had three existing buildings, a small cabin to the west, a cottage/workshop to the east, and a single-family home in between. The single-family home was encircled by asphalt making portions of the site automobile-centric and impermeable.

The Biophilic Day charette led to the project’s theme of “Rewilding the Ecosystem”. The project sets out to return, rewild and regenerate the imposed landscape back to a more naturalized state. Portions of the encircling asphalt have been broken out making the site more permeable. The new living building is being built within the footprint of the old single-family home with a significantly smaller footprint than the previous building, therefore returning land back to the ecosystem. Over time, the landscape will become a more self-sustaining and healthier habitat for wildlife, plant life, and people.

The landscape strategy for the majority of the site is to preserve, protect and restore the existing Garry Oak ecosystem, a Sensitive Ecological Habitat unique to the West Coast.

The Environmental Consultants report by Aquaparian Environmental Consultants identified “The undeveloped portion of the land is not suitable for development due to the sensitivity and rarity of these ecosystems, location of significantly large trees and due to the archaeological sensitivity of the site. As such, the proposed redevelopment will be restricted to previously disturbed and developed areas of the site”. The aim is to preserve the existing Garry Oak Ecosystem and in addition re-wild all previously disturbed areas.

CERCA is a private, nonprofit organization that actively works to restore and conserve the Cowichan Estuary. The Cowichan Estuary is 1000 acres of vital land/mudflats that determines the ecological integrity of the entire Cowichan Valley. Although CERCA is not a registered land trust it follows specific standards and practices that are inline with the Land Trust Alliance of British Columbia. The Cowichan Estuary is “owned” by the Province of British Columbia in trust for the people of the province. While the provincial government holds the land, CERCA is an active steward of the estuary. The Green Point Project is adjacent to the Cowichan Estuary and members of the project team are actively collaborating and volunteering with CERCA.

The Green Point Project strives to reduce transportation-related environmental impacts by first reducing the need for transportation by providing live/work spaces onsite. When transportation is required for the acquisition of supplies etc. all required amenities are within cycling distance. Weather-protected storage for bicycles is provided in existing shed/garage facilities. While not required in Transect L2 an EV charging station is being provided to promote alternative-fueled vehicles and green infrastructure.

The Green Point Project is not located in a highly walkable district but a large portion of the community does walk as a primary means of transportation. The semi-rural roads do not have sidewalks or designated walking paths. As members of the community, the team is advocating for safer foot/cycle travel through implementation of designated walking/cycling paths and/or sidewalks.

The Green Point Project is a 6.2 acre site located in the Cowichan Bay watershed that is 95% undeveloped. The site is a threshold condition between a Garry Oak ecosystem and the Cowichan Bay Estuary, both of which hold great ecological importance to the surrounding region. Rain that falls on the site primarily infiltrates down into Aquifer 176 – a 15.5km2 aquifer of fractured sedimentary rock that forms the base under Mount Tzouhalem. The project’s water system consists of a well drawing groundwater off Aquifer 176 and a septic system discharging treated water for infiltration.

The pre-Green Point development hydrology of the site included mass amounts of irrigation for a small private golf course and exotic gardens, on-site well water extraction, off-site spring water extraction, and a clay tile septic system perched on the edge of the beach. The Green Point Project team identified the problematic nature of the existing system and removed the irrigation system, stopped the extraction of off-site spring water, and removed and replaced the septic system a safe distance away from the waters edge to limit effluent seepage. The only hydrological component that was preserved was the existing well and pump system. In addition to these changes the surface hydrology of the site was altered by removing a portion of the impervious driveway between the building and the beach to limit run-off into Cowichan Bay and by altering the soil composition around the new septic field to be more sandy which aids in surface infiltration on the flattest portion of the previously disturbed site. The current hydrological system improved upon the old without altering the larger hydrological site flows of the Garry Oak ecosystem and Cowichan Estuary.

All of the project’s water needs are met by drawing potable groundwater from an existing well and pump station located to the east of the new development. Underground piping distributes water to the new residence where it is metered and treated by both particulate and ultraviolet filters prior to distribution throughout the house. This treated groundwater provides all fixtures in the house with clean water. Chosen fixtures are low flow to limit water use and subsequent aquifer stress.

After use in the house, greywater and blackwater are gravity fed into two concrete holding tanks below grade to the south of the building. The effluent is then pumped to the north side of the building where it is treated with a two-tank Bionest reactor system under the northern deck. The Bionest system uses bacteria to break down effluent prior to sending it to the leaching bed. After treatment, the medium is sent to the septic field for infiltration in a softscaped area free of trees with deep roots to the west of the building – a previously disturbed area that is a safe distance away from the water’s edge. Rainwater from the rooftop is collected in rain barrels for use in the food production garden. Excess rainwater is directed away from the structure for direct infiltration in the surrounding landscaping. Stormwater that falls elsewhere on the site is subject to the natural water flows of infiltration and transpiration feeding the Garry Oak ecosystem, replenishing the groundwater aquifer, and completing the water cycle.

Green Point is on the unceded ancestral territory of the First Nations Cowichan peoples. Before any settlers came to Vancouver Island, it was a village, and also a home to the infamous Chief Tzouhalem. The land has tremendous cultural and historical significance to the First Nations people. The land is situated at the base of a mountain named after the Chief.

The previous occupants of the land changed the natural landscape into a well-maintained and manicured park-like setting with a small private golf course. The existing single-family residence was found to be inhabitable. This is where the “Green Point Project: Rewilding the Ecosystem” begins.

The existing residence was contaminated with lead, mold, vermiculite and asbestos. Therefore, the design process started from restoring the land to rebuilding the home. Their Integrated Design team became inspired by the history and the natural setting of the land. The beauty and spirit of this place became a by-product of the respect they gave to the history and natural setting of the ecosystem.

The architectural form and shape of the building were inspired by the First Nation Longhouses on Vancouver Island and the simplicity and beauty of the rural farmhouse buildings. The new smaller residence was built within the footprint of the old home respecting the archaeology of the site and also reducing disturbance to the land. The new building is not only a home for a family but also a live/workspace for a health and wellness Practitioner. A bridge connects the land to the entry of the home. The roofline, proportions of the new home along with the large deck and slanted columns create a simple yet beautiful dynamic form.

The project explores biophilia and how connecting to nature affects our human senses. Designing spaces that allow for reflected light off the ocean to dance on the ceiling and create beautiful patterns. Interior and exterior spaces that promote visual and acoustical connections to nature and wildlife. Places to whale watch, listen to the birds, hear the ocean crashing onto the beach during a storm. Entering the project through a garden that is surrounded by local food-producing plants and engages one with all the wildlife that also makes this place home. Texture and feel are also important. The north wall of the main living space is clad in reclaimed cedar, considered a “healing wood” and giving warmth, a fresh scent while inhabiting the interior. The main living spaces bring human delight by engaging views of the scenic landscape and also connecting physically through touch with natural materials like local woods. Natural sunlight floods the main spaces often with shadows of animals passing by. The colors of the building, blend with nature’s tree bark and also the turning colors of leaves. Occupants and visitors on the property have reported better sleep patterns, less anxiety, more energy, reduced joint pains, and overall better health.

Using red-list free materials that are mainly salvaged and repurposed, the design team built a beautiful staircase that connects the two floors of the building. Reusing washed-up industrial logs as structural columns created a beautiful exterior deck to connect the human senses to nature and it became their ‘favorite’ place to dwell. Repurposing an entire kitchen, that was slated for demolition and reusing weathered wood for siding; that was originally firewood to be burnt in a kiln, gives a rustic patina to the beauty of the building exterior.

Green Point is beautiful from the human perspective, mainly because the team did just enough and not too much. They let nature come back and take its course and it will continue to do so. A visitor once said “that the building feels like it’s always been here, and that the trees welcome us every day.” Somehow, that just seems right.

Overtime, the land itself is slowly rewilding back to a more natural state. The abundance of wildlife and diversity of nature continues to grow, there lies the beauty.

In many ways the Green Point Project has been more about inspiration and education than about architecture – architecture has been the mere tool to inspire and educate. The Green Point Project is a project of sharing – sharing passion, beauty, space, respect, awareness, questions, information, and technical details – sharing of the journey that Kenneth and the project team have taken. Sharing has taken shape in a variety of media and mediums from the typical forms via on-site signage and a project website to a photographic stream of consciousness Instagram page, a professionally-produced documentary film, delivery of numerous lectures both at higher education institutions and at public events, and through an endless stream of site tours during all project phases for industry partners, elected officials, students of various ages, community members, neighbours, friends, and family. This process of sharing has been ongoing since the project site was selected in 2016, through the transparent phases of design, deconstruction, construction, and performance tracking, and will continue past project “completion” through the lessons learned and the ripple effect that it has had in the community.