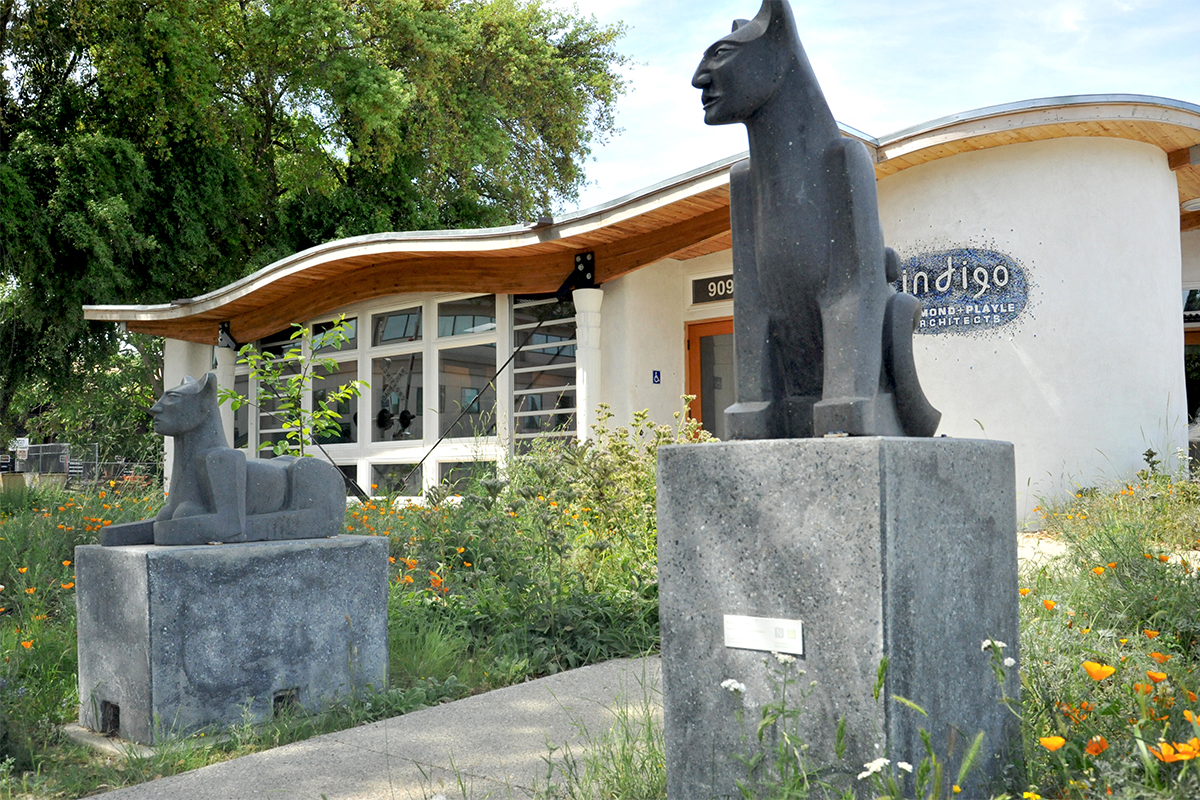 The buildings are laid out so that virtually all the windows face either south or north. The south-facing windows are designed with overhangs that will shade the windows in the summer yet admit sunlight in the winter which will be used to heat the building. Thermal heat sinks are provided to capture the heat from the sunlight in the winter. The large south facing windows will be fitted with insulated drapes that will reduce unwanted heat loss and heat gain. The passive system will be designed so that it will coast through two-cloudy winter days without the use of a backup system. This same system will be utilized to passively cool the buildings in the summer. Ventilation at night will bring in cool night air to cool the heat sinks which will then cool the building during the day. The buildings are designed for natural cross ventilation. In addition to the passive system, a hydronic system will be deployed in the building slabs to provide backup heating and cooling. On the cooling side, the water will be chilled using evaporation and radiation to the night sky. This water will then be stored in insulated tanks and/or in a cooling pond.

Small diffusing skylights provide adequate light so the electric lights are seldom used. All interior light fixtures are CREE LED, low-energy consuming. There are ceiling-mounted fixtures in the main workspaces and wall-mounted sconces in the hallway and toilet rooms. Exterior fixtures consist of pole-mounted LED’s in parking and site areas, ceiling mounted LED fixtures to occur at doorway entries to the building. All light fixtures come equipped with light sensors, which consist of two types. First, there are photocell detectors located in skylight wells to advise the system when electrical lights can be dimmed or turned off. Secondly, there are motion-detection sensors distributed strategically to measure human activity in most spaces. When activity ceases, the lights are turned off by the system. The picture above is an interior space showing 2’x2’ diffusing skylights. The ceiling mounted LED fixtures are also shown, but not lit, are seldom needed.

The studio and office space have implemented the following user load reduction strategies: ceiling fans, light-sensor equipped light fixtures, operable louver windows, a casual dress code for comfort, an adjustable thermostat, in addition to work computers being turned off at the end of each workday to reduce daily plug loads.

The building is designed to encourage access to outdoor spaces, the outdoor spaces will be provided with shaded benches and tables that will allow for employee breaks and informal meetings to be held outdoors during fair weather.

project leadership and story of project

Adaptive reuse of a Dairy Queen transforms a midcentury modern hidden gem into a showcase for sustainability. Originally built in 1967, the 1,400 SF restaurant served a generation of families and was a community icon. After business realities forced its closure, architects saw the potential for its transformation into their new office and studio. The challenge: how to complement the iconic form of the Dairy Queen while increasing its area to the necessary 4,000 SF. The answer was to mix mid-century modern with the vernacular corrugated metal buildings found in fruit drying sheds and agricultural structures found along California’s heartland railroads, similar to the one adjoining the site.

The existing Dairy Queen had a 1,400 S.F. kitchen and dining area enclosed under a 2,600 S.F. roof. The building has an interesting “gull wing” roof shape. The site is almost completely paved with ac for parking. Combining the roof area and the ac paving area, the site is currently only 2% permeable. Site drainage is all on the surface and drains to the streets and the railroad tracks. There are two large cork oaks that protect the West side of the building; they are in the railroad right of way but they intended to do everything that we can do to make sure that they were preserved. There is another younger cork oak on the east side of the property. The site is located in a district of the City with many examples of functionally expressive buildings and utilitarian structures, both old and new. The character along the railroad tracks was unique and worthy of fostering as it has a unique charm about it.

Indigo | Hammond + Playle Architects expanded and converted the old Dairy Queen into offices for their architecture firm. The goal was to create a super sustainable passively heated and cooled design studio. They intended it to work within the context and atmosphere of the district of the City by utilizing simple and honest use of building materials, cork oaks, valley oaks, native grass, and the “Midcentury Modern” lines of the old Dairy Queen. They aimed to preserve the spirit of this iconic Davis landmark by retaining the swooping gull wing roofline by repurposing and reimagining the building using sustainable climate adapted straw bale architecture. It was repurposed as a design center on the railroad tracks. There also exists a studio workshop addition to the existing building that is designed as a flexible project space; the design is inspired by the old vernacular shop buildings seen along Central Valley railroad tracks but updated. For example, the south facing shed roof of the addition will accept solar voltaic collectors and solar hot water heaters.

Preserving the curved, glued laminated beams and gull wing roof was a must! Climate-adapted design principles are used to harvest energy from the environment through daylighting, passive heating, night ventilation cooling, and thermal storage. The result is a great new office, studio, and workplace using unique building forms and the memory recall associated with them to provide connection to the context and the community. The high-level of energy efficiency, sustainability, and beauty attained in this design serves the community as an important example to look up as it considers plans for sustainable and regionally appropriate growth in the future.

The existing Dairy Queen is extensively reworked to provide 2,800 S.F. of architect office and studios space. A 1,200 S.F. gallery and event space addition with a high ceiling and ample daylight are used for art openings, lectures, workshops, and other community gatherings. Together, the remodel and addition express the architect’s mission to “integrate art, architecture, and ecology in order to put people in touch with the environment, each other, and their spiritual and cultural aspirations”. There is no reliance on pre-manufactured materials and finishes. Instead, the design explores the use of natural finishes, craftsmanship, and artistic expression.

An example is the biophilic, equisetum-inspired columns sculpted by the architect. The climate-adapted design harvests and stores energy from the natural environment, resulting in a building which is passively conditioned over 90% of the time. How was this done?

First, heat gain is minimized through the use of south and north facing windows, shaded with appropriate solar overhands and fins to bring in daylight but without unwanted heat gain. Daylighting with advanced control of the all-LED fixtures further reduces heat gain by keeping electric lighting off while providing a high quality, naturally lit workplace. Next, building walls are super-insulated to R-40 using locally harvested straw bale walls, an agricultural by-product from the valley’s rice crop. Automated louver windows open at night in summer mode, passing cool night air over the culvert pipe thermal storage tanks, pre-cooling them for use the next day. Finally, sophisticated controls operated the building’s natural conditioning system integrating thermal mass, a 1,250-gallon water storage tank, hydronic tubing running through the concrete floors and a backup air-to-water heat pump.

An 11.4 kW photovoltaic system was installed in December 2016. The system is sized to make the building zero net energy positive. The site features native drought-tolerant and edible landscaping and shaded courtyards which extend indoor space to the outdoors for thinking, working, collaborating, and meetings. A solar-powered fountain is featured in the main courtyard.

building commissioning, start up, and optimization

As previously mentioned they retained and utilized the building structure and reused the gravel under the existing AC paving. The design called for the use of super-insulating walls made of straw bales were used to encase the Old Dairy Queen building. Straw bales are locally grown and manufactured from rice straw, an agricultural waste product. Other sustainable material choices included concrete with fly ash replacing cement, and corrugated metal siding and roofing manufactured from recycled steel.