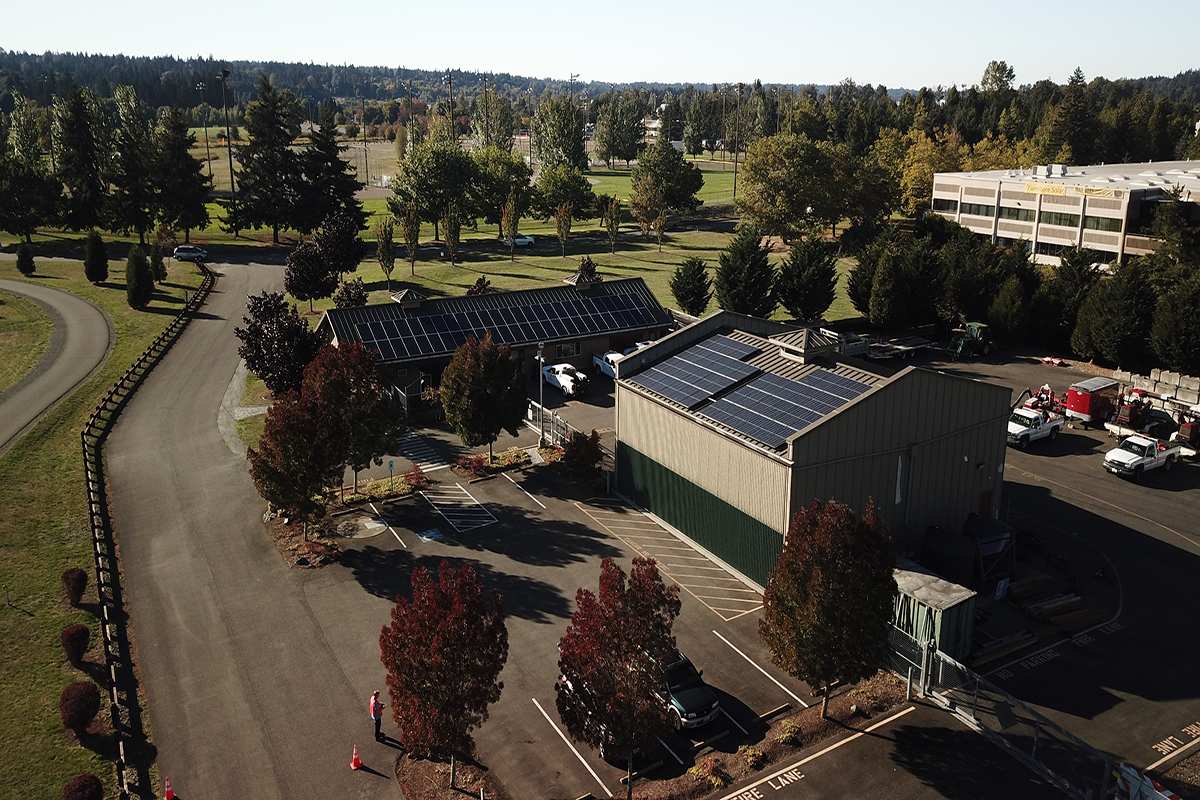 The North Utility Maintenance Facility is a capital asset managed by the King County Parks and Recreation Division (KCParks). It is an existing Parks maintenance and operations facility that includes a crew/ workshop building and a parking/ workshop building. The work of the North Utility crew supports the maintenance and operation of King County Regional Trails north of I-90. These include the Sammamish River Trail, Burke-Gilman Trail, and East Lake Sammamish Trail, among others.

The facility underwent a series of energy efficiency facility upgrades from 2016 to 2018 to improve the environmental and sustainable features and building performance. The project began with the installation of solar panels planned to produce enough renewable energy to cover the energy load for the facility. KC Parks in partnership with David Broustis, King County Department of Natural Resources Energy Manager, and supported by a Washington State Department of Commerce grant, completed the installation of a 37.5 kilowatt photo-voltaic (PV) system on the roof of the North Utility crew building in 2017. It was expected to produce 33,200 kilowatt hours of electricity per year. The PV system is interconnected to the Puget Sound Energy electric grid network and began producing solar power on August 8, 2017. Following this initial solar panel installation, additional energy upgrades to the crew building, including the installation of a new energy efficient HVAC system and changing to LED lights, further improved the energy performance of the building.

The facility reached Zero Energy following a second solar panel installation on the south roof of the parking/ workshop building in mid-2018 that raised the expected solar energy production at the facility to 44,600 kilowatt hours of electricity for 2018.

Daylighting and LED Lights are incorporated. All lighting in both crew and parking building were upgraded to high-efficiency LEDs in November 2017.

“One of King County Parks’ efforts to safeguard and enhance our natural resources and environment is by minimizing our operational environmental footprint. The solar energy produced by the installation of PV panels and other energy efficiency upgrades at the LEED-certified North Utility Maintenance Building represents the continuing efforts of King County Parks to improve the efficiency and sustainability of our facilities.”

North Utility’s energy upgrades were made possible by the Parks Operations staff, notably the Crafts and Grounds crews, who worked with outside vendors to complete the work.

Monitoring the energy generated by the first installation of solar panels and the facility’s energy usage revealed the need for additional energy system upgrades. As a retrofit project, the opportunities for facility improvements had to be carefully evaluated to reduce energy use enough to be offset by the solar power generated on the available roof space with cost. The original buildings were built in the early 2000s and were not designed to be zero energy.

Ultimately, the project integrated cost-effective solar panels and cutting-edge energy efficient lighting and mechanical equipment. Specifically, the building’s lights were retrofitted to high efficiency LEDs, and a premium-efficiency heat pump system replaced the heaters and air conditioners in the office and shop spaces.

Additionally, in May 2018, solar panels were installed on the south roof of the parking building, another structure at the facility, as Phase II of the solar panel installation. The combined total of 156 installed solar panels at North Utility were on track to generate over 44,600 kwh in 2018.

“It has been my privilege providing electrical services to the North Utility building project which has given the community a building with smart design and state-of-the-art technology to achieve world class energy efficiency. It is great we met the energy efficiency goals we set out to accomplish and also improved operations of this building for many years to come.”

The North Utility Maintenance Crew, parking, and storage buildings solely use electric power, including for heat. The solar energy that gets produced by the PV panels is returned to the PSE electric grid. A monitoring display is located in the Crew/Workshop building that displays energy production from solar panels.

The project had an unanticipated additional challenge for meeting its zero energy target. During the 12- month monitoring and performance period, the workshop at North Utility began metal fabrication of King County Parks trail bollards, in addition to performing its ongoing maintenance work. This activity led to occasional energy use spikes that resulted in an overall 15% increase in energy use at the site. However, this increase was offset by the solar energy produced by the two solar panel installations.

Whereas the solar energy production from the installation of PV panels worked in the background to lower the energy use of the facility, the other energy upgrades were more noticeable and appreciated by the facility’s staff. The new lighting and HVAC system not only helped improve the crew building’s energy efficiency, they improved the indoor environment for the facility staff.

“The best part of this project for us is that the new HVAC system is a wonderful upgrade. Before we had that system, we were cold in the winter and hot in the summer, now we are enjoying a comfortable work environment that is energy efficient.”

The process of achieving Zero Energy for the North Utility Maintenance facility was done through a series of building upgrades while monitoring the variable energy use of the facility. Following an increase in energy use at the facility due to bollard fabrication in the workshop, the combination of solar energy generated by PVs on two buildings, the new energy efficient HVAC system, and switching to LED lights resulted in the facility hitting its zero energy target during the 12-month monitoring period. Thus, the efforts to reduce the facility’s heating, cooling, and lighting needs also contributed to the project’s energy gains. Additionally, the second installation of solar panels on a south facing roof increased the total yearly generation of solar energy.

The project cost effectively achieved Zero Energy for a facility located in King County’s most popular park, with more than three million people visiting annually to explore Marymoor Parks’s 640 acres of recreational activities, rare amenities, and culturally-enriching events. In addition, the division continues to maintain the same class A level of services. As one of the County’s first projects to achieve certification, the project found the Zero Energy certification process easy and straightforward to implement, with the technical support of ILFI. Zero Energy supports King County’s climate change goals of reducing community wide greenhouse gas emissions by eighty percent by 2050, as well as maintaining the department goal of carbon neutral operations.

“Implementing the energy upgrades in increments made the building performance improvements more noticeable and rewarding in terms of seeing the improved efficiency with each new upgrade.”

“The best part about this zero energy project is that we were able to improve the building conditions in the process. Focusing on reducing energy use as much as possible before right-sizing the solar system enabled us to provide higher quality lighting and better building comfort, while significantly reducing energy use.”