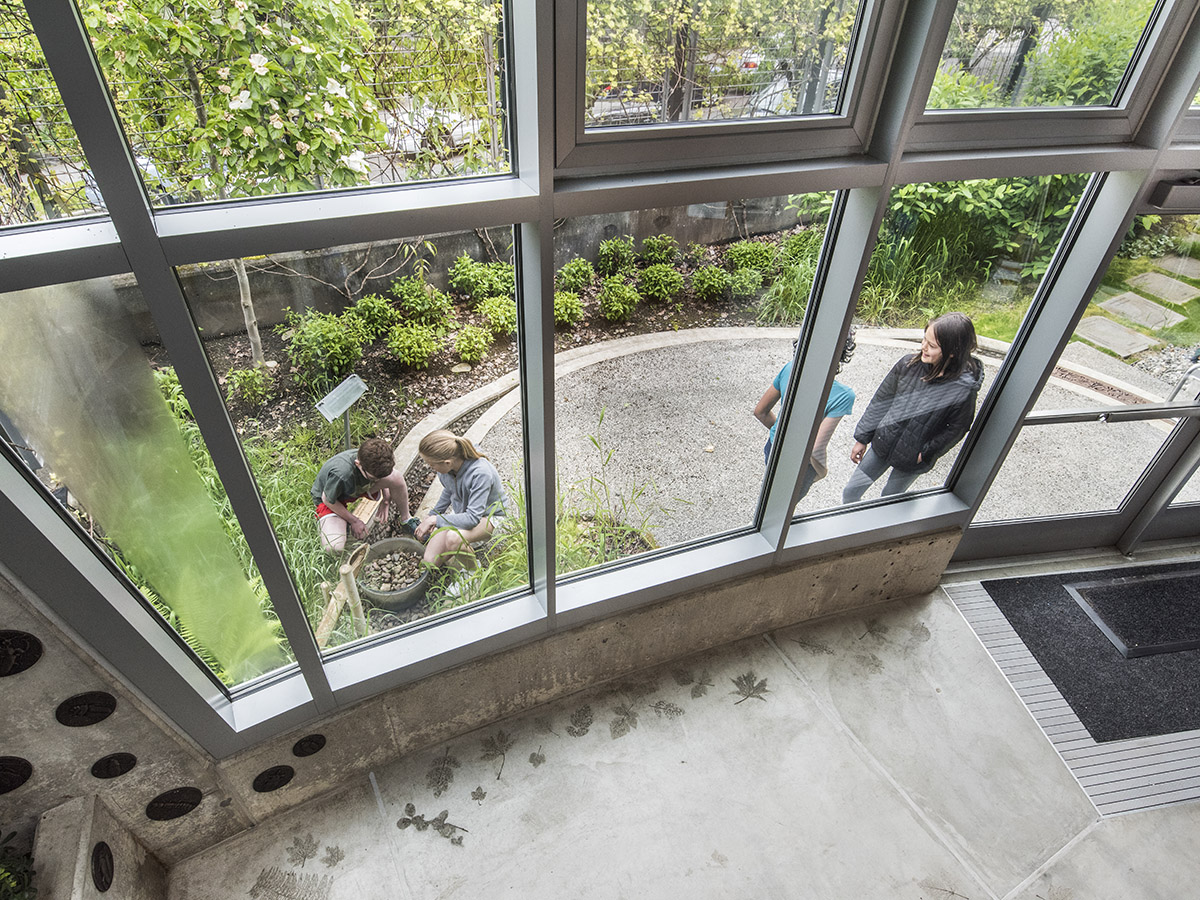 The Bertschi School Science Wing serves as a hands-on earth science classroom for kindergarten through fifth-grade students. Consisting of a classroom, attached greenhouse and outdoor garden space, it was designed for—and in part by—elementary school children. The project demonstrates how biophilic design can be used to not only connect children with natural processes, but engage them in learning.

The team involved the students in the design process early on by asking them how they wanted to see nature expressed in their new classroom. Unconstrained by the realities of budgets and architectural conventions, the children gave their imaginations free rein. Their simple requests reflect the innate yearning for the natural world: a river running through the classroom; views of the sky; a greenhouse full of plants growing all year round.

Many of the children’s ideas became central elements in the final design. The “indoor river” forms an integral part of the rainwater collection system. A wall of plants lines the tallest wall of the EcoHouse, a greenhouse space that also houses the water treatment equipment. And an ethnobotanical garden just outside the classroom allows the students to care for, harvest, and use native plants, connecting them not only with the natural world here and now, but with the Duwamish people who originally inhabited the region.

Seattle is a place of rain and water. The Bertschi School is located on a steep hill where the rain rushes down the urban streets to reach Lake Union. Children who grow up in the Pacific Northwest are used to splashing through puddles on their way to school and arriving with wet feet and faces. In this region, buildings provide both refuge from the rain and protected spaces from which to watch and enjoy it. Given this reality, it is not surprising that the kids at Bertschi asked for a river running through the building.

When the rain starts to run down the “stream,” the kids immediately run to observe; they reach out to touch the glass and follow the flow of water as it makes it way to the cistern and raingarden. More than just a water feature, the stream celebrates a connection to place and encourages exploration and discovery.

Buildings in the mild climate of Seattle can be naturally ventilated during all seasons except for winter. Because it was an addition to an existing building, the science classroom’s access to sunlight was limited, but the design makes the most of the tight urban site with creative forms that effectively capture daylight.

In the classroom, the butterfly roof promotes a natural stack effect and provides natural ventilation and daylight for the space through a row of high windows. The greenhouse unabashedly celebrates the power of glass and sun to create a semi-tropical ecosystem that is in striking contrast to those typical of the cool Pacific Northwest. Even on an overcast day, students can enter the EcoHouse and feel the combination of captured solar energy and humidity from the transpiring plants on their faces and arms.

The living wall in the EcoHouse grew directly out of the students’ request for “plants growing everywhere.” Though living walls are sometimes installed simply as pleasant features, the plants on this wall serve a greater purpose: they treat and thrive on greywater from the building as they clean and oxygenate the air, engaging and instructing students on the water cycle and the ecological role plants play in capturing nutrients. Two moss-mat green roofs also provide a natural cover to approximately half of the building; these can be viewed by students in the adjacent classroom, which is oriented above the science classroom’s roof line.

The design was grounded in the notion that nature is intellectually as well as physically and spiritually stimulating. The varied textures, shapes, and colors stimulate the children’s innate curiosity, and every day Bertschi School students learn how features that are elegant and beautiful in form also function beautifully as well. The plants on the living wall filter greywater from the classroom’s sinks and naturally purify the air. The runnel transports rainwater collected from the building’s metal roof to the cistern, engaging students in the hydrological cycle. The plants in the ethnobotanical garden, so pleasing to look at, also provide food and useful materials for making things.

The building integrates natural systems and processes; consequently, change and metamorphosis are not only implied, but experienced directly. The students engage with the changing flows of water within the runnel and interact with the plants as they grow, flower, fruit, and sometimes die. Students harvest the edible plants and they engage with the seasons as the roof mosses change color and bloom, and as wind-blown seeds sprout and take root alongside them. They notice as the electrical demand of their classroom changes and as passing clouds affect the electricity generated by the solar array. No matter where the students look, the natural elements of the Bertschi Science building are always changing—just like the students themselves.

The Bertschi School Science Wing demonstrates how successful biophilic design engages all of the senses. In this hands-on educational setting, children are encouraged to touch the plants. They can hear the gentle trickle of water coursing gently through the runnel; they notice the change in humidity as they enter the EcoHouse, where plants on the wall breathe out life-giving oxygen and transpire water. They can see textures of the plants on the living wall, and they can press their hands into the imprints of salmon “swimming” across the floor alongside the runnel and run their fingers across the leaves imprinted in the concrete.

The children experience these features both consciously and unconsciously. Because so many of the biophilic elements were designed with integrated functions and hands-on learning in mind, students interact with many of them in their daily lessons.